I feel like I am one of the most demanding men out there. So I tend to avoid relationships, why to inflict myself on a woman who is out to have a good time? But maybe I can articulate here what I want and I feel all other men also want.

Photo by Samantha Sophia on Unsplash

What do women want?#

But let me digress here and talk first about what women really want from their men?

It is said that Women have a never-ending laundry list of what they want from men. But I think that is not true.

Now, remember the feminist suffrage movement only started in the 1960"s. So woman are still tuned to their primitive mating mindset.

Why do women leave men?#

It might happen that a man and woman of equal status might meet each other get married, but then the man loses a job or has to shut down his business. This is where the status of man has fallen. This corresponding loss of status makes the woman anxious and she gets lured to other higher status men.

Status loss is often an indication of the man’s capacity to earn. If at this time the woman decides to leave the man, she has literally pushed the man into destitution.

Of course, this is never said in public. The public is informed that the man has an addiction issue. So she had to leave him.

Slut shaming is a taboo unless it is done by another woman.

How does a man prevent a woman from leaving him?#

Have you known about the “possessive man”?. This man literally keeps his woman under lock and key.

If she is earning, all her earnings go into a common bank account. He also makes sure the woman has all the comforts she needs in life so as not to trigger her.

These men donot allow opportunities of infidelity. No office tours outside the city etc.

The man literally bulldozes his way to higher status (compared to his spouse) by keeping the woman in check.

This can be abusive if the man has no conscience.

Now what do men want?#

This is again false and maybe feminist propaganda. :)

Connection is good sex for me. It might not even be physical. Men are adrift and their sense of connection and grounding comes from a woman.

Without connection, the entire relationship is a farce. It is just lip service. This connection is further reinforced when a woman bears him children.

Often when the elder’s pressurize young couples to get kids, is when they see that the couple doesn’t have a good connection. (aka - risk of divorce).

Men need to belong to compete!

Community means an assurance that the man will not lose all his social clout when she leaves him.

At what point does a woman give up on her husband?#

Should she put up with a husband who never wants to get out of his addictions and see the doom of her children and family?

So let me not push women in a tough spot. But a man needs to know how much she can endure and keep fighting for them to be together.

If he thinks she cannot endure, he will try to find another community.

The below Charles Bukowaski Quote sums up men’s state of mind with women problem.# 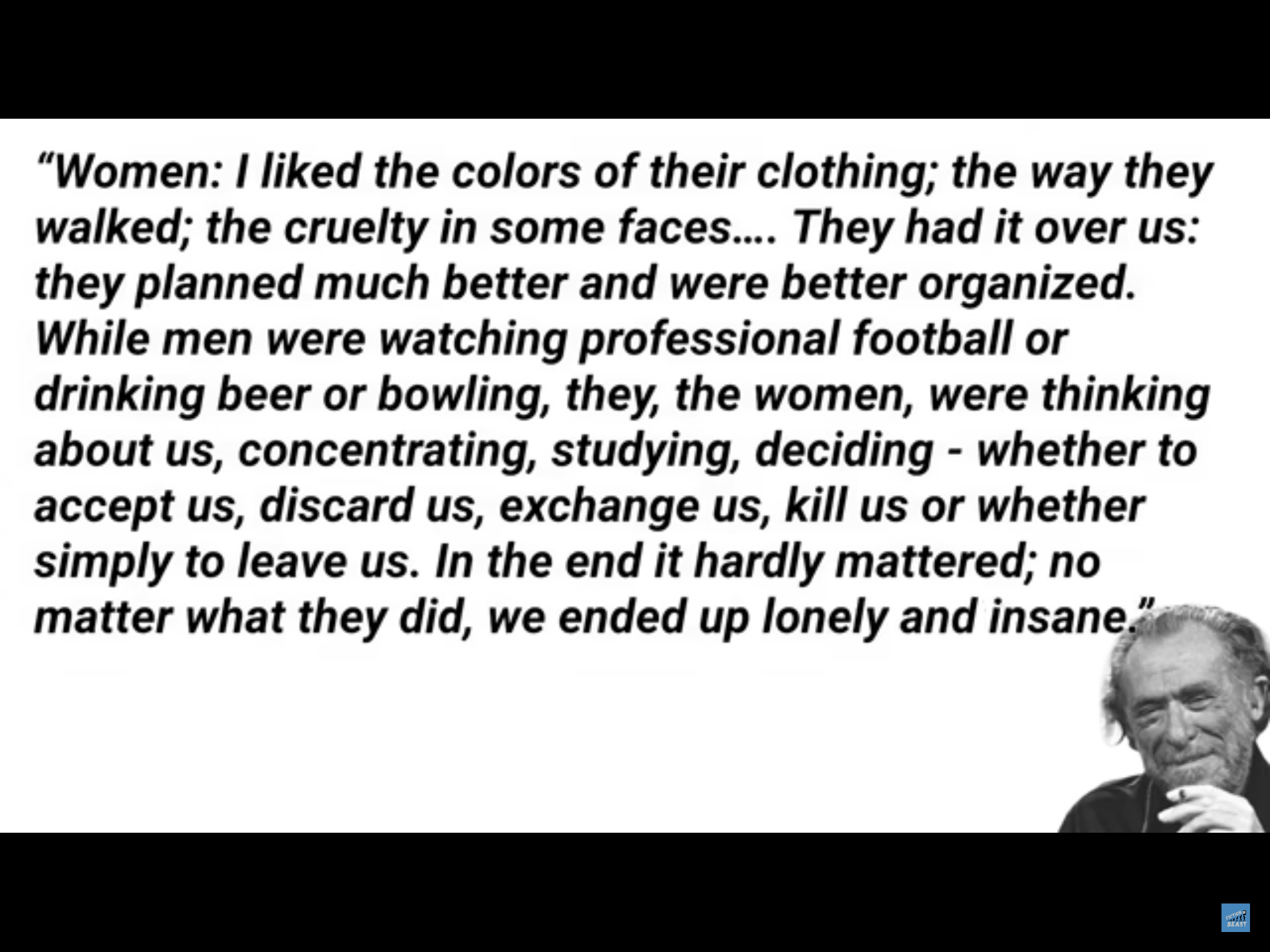 Recurring dream of beautiful women chasing me for sex